They say it is lonely at the top, but how lonely do you think the bottom is? The bottom billions who live invisible lives as they struggle to come to terms with sins they never committed visiting them? Many are the tears and few are the wipers. Blessed are the meek who wait to inherit a dying planet...

Speaking of planets, do you remember the earth anymore? Do you remember those who have to cut down trees, not because they don’t care for the environment, but because without cutting those trees for making charcoal and firewood to sell, they will die of hunger and their children of misery? Perhaps you don’t even know about them. If so, let me recount for you, to thin the mist of indifference a little bit, a list of everyday visible tragedies that visit my people.

I was a boy when I first understood what poverty feels like. My late father, a righteous man of righteous undertakings, would take off at dawn to hustle at the beach. But before that, a herdsman for a rich man’s cow herd and before that a small corner shop owner. Never lifting off the ground he gave in to the the eternal sin of dispossession. There is no upward mobility for the un-promised.

My mother, bless her, was never settled, always moving but never arriving. A hustle here and a job there. Six of us as the kids of working, lumpenized peasant parents, we knew what we were growing up into. We didn’t need a Marx to explain class consciousness to us, the reality did that well.

Fast forward, father passed unto the eternal darkness a broken, fatigued and restless man — I hope he’s resting now forever in the womb of the great earth. Mum tarried for a little while and married another invisible and dispossessed man. A man who cut down trees and burned them for coal. A hectic job that required more muscles than holding the sky above us. Once the tree has been cut down, cut into several pieces and buried into the earth with fire, we now all wait giddily for another month or so to finally harvest it. I remember how I and my big brother would be there at night with the old man, studying with a dim torchlight and helping him fill the holes that appear in the coal-burning oven. After the harvest, a bag of coal will cost perhaps two dollars, and he will go home with like a hundred dollars after all that work.

A day came when he was arrested in the forest by the authorities for cutting down trees. They said he was involved in environmental destruction. He wasn’t conscious of climate change. Treated like a savage from another century, he was hurled off to the little police cell for a long while, and then released. Sick and weary, he was nursed to health only to start the cycle all over.

I remember how I was a good firewood seller by our little gate. Our house was known for the firewood bundles, and true to form we were there to serve the needs of the community. It never yielded more than a lunch and a dinner, but we pulled through even as mother works from dawn to dusk selling fish for a little, miserable gain. Those were the times, and still are in more ways than one, as the race to the bottom spirals ever on.

I am here recounting these tales to get to the point that the discourse around climate change and many such ills of the world is very much rooted in an unannounced privilege. A failure of the imagination, but is it? Or the stories from below, from the hidden of history isn’t what informs our great learned discourses? Our theories seldom look that direction, in the direction of the impoverished, because they won’t understand what it is that we yap about. Today the agenda is climate change and we are told to plant more trees. My people have been on the campaign and to talk about cutting down trees is a sacrilege. But I am the child of a tree cutter, the child of those who never were given the opportunity to make something worthwhile from their labour. So whiles the world talks about climate change, I think about my coal-making father and how, without opportunities to feed the fam, we will have to probably illegally cut down those trees for survival's sake. Like many of his generation — uneducated, with no access to the basics of life without toil — the chances are slim and the road ahead long and gloomy.

Blessed are those who plant trees and blessed are those who cut them to feed and clothe a generation. Knowing there will never be progress in that regard until the contradiction that seldom loosens is resolved; the dispossession that dances itself proudly into the lives of the bottom billions who will suffer from the scourge of climate change more than any other. As the vastly rich continues to rob us of our humanity and pollute the earth to annihilation, it's the poor, black and brown who receive both the threats and curses of a dying planet. We talk about capitalism and climate change in a way that focuses on the center of oppression more than it centers the periphery. Capitalism then becomes a word, a brand, a popular thing whose bashing is mandatory for a woke generation of lost ones. It's cool to diss capitalism and to talk of eating the rich, but awkward to talk of the privileges of those who engage in this discourse. Those who have forgotten about the poor woodcutter on the slum side of town.

A program of action? We must destroy poverty. We must destroy the neocolonial state. But perhaps we must destroy wealth. Poverty is lack, a nothingness, an abyss, and wealth is abundance, an arrival, a conclusion. Which then must be destroyed to end another? What is the use of saving a planet when those who populate it are dying faster than the planet itself? Creatures, beasts of burden, humans are all dying, and trees too, because the focus is far off from them. A brand has been made out of the environmental movement. A vegan, fair trade, intentional community-branding, as if individual devotion to aesthetics will save us from being fried by the ever-intensifying heat. As if marketing a woke stance will deliver us to the oasis of a crisis-free world. We know it will not be that way. Sound reasoning reminds us of our inherent contradiction — accumulation and dispossession. That until that day comes when the resources of the earth are for all in an equitable fashion and private property abolished, then my woodcutting step-father will continue to cut your trees to feed him and his fam and side eying you as foolish, useless, well-branded set of activists who knows nothing about the loneliness of the billion bottom.

"...as [gentrifiers] continue their march to some of the oldest and most culturally rich and diverse neighborhoods in our city, it becomes too imperative an existential threat for people to remain idle." 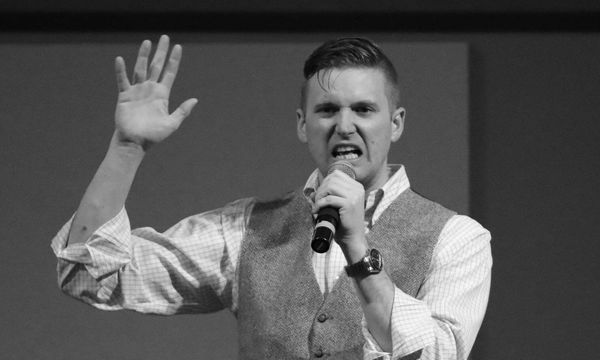